As my regular readers may have gathered, Mexican cuisine is something I love. This stems from being raised on Mexican and eating as much of it as possible on my infrequent visits back to the USA. So when restaurateurs decide to open a Mexican outpost because it’s 'like so cool right now' without learning how to make the food properly it really makes me angry (think Ari Gold tirade). Luckily my faith has been restored by some first time restaurateurs setting up shop in Richmond.

When I heard that Paco’s Tacos had replaced the underperforming Movida Terraza (financially underperforming, the food was actually decent) I was really excited to have a more accessible lunch taco option than Mamasita (hopefully without a side of groan inducing hipster attitude).

Last week I got some of my regular lunch buddies together for a girl’s lunch at Paco’s. Firstly I’ll give them credit for the positives: it’s a great outdoor venue that would be good for after work drinks in summer, they have their kitchen garden spread around the tables, which adds a point of interest. 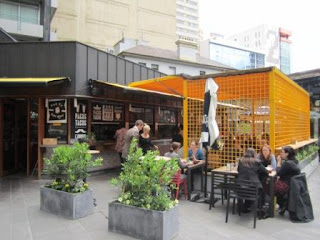 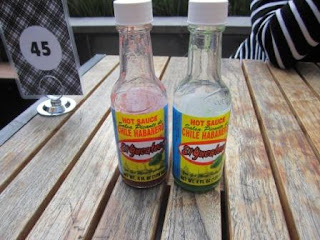 We started our lunch with a flustered and slightly rude server when ordering at the counter, which I generally forgive when a restaurant is busy but not when it’s practically empty as it was at 12:05 on a Wednesday.
We began with the Chicharrones (pork crackling $10) with salsa verde and a roasted capsicum salsa. The salsas were flavourful, however, the crackling should be cut smaller and be crispy (ours was hit and miss, which makes it hard to bite through giant chunks). 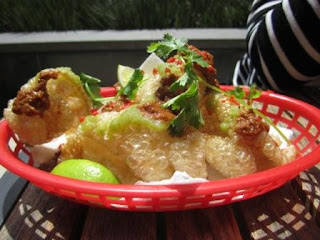 H ordered some vegetarian tacos ($6 as are all their tacos), which had black beans, pico de gallo, guacamole and queso fresco. Main Problem: as with all of the tacos we ordered, the corn tortillas were not prepared properly. They hadn’t been toasted on a grill and they were cold, had a bad flaky texture and fell apart. Again I would have let this slide on the basis of it being a one-off, but my reading of other diners reviews suggests that it’s a constant issue (who cares if the tortillas are from Casa Iberica if you don’t know how to serve them). 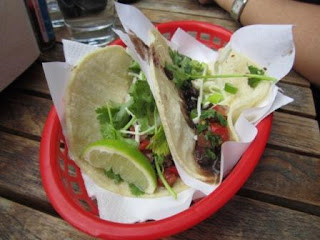 Y and I shared the ‘pulled’ pork tacos with pineapple. The filling was fine but the tortillas were problematic. 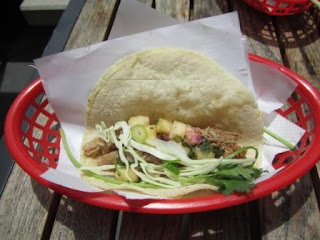 Next we tried the prawn tacos. 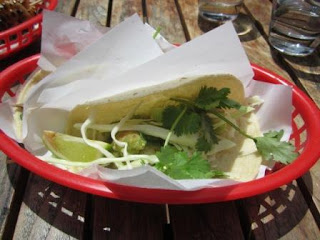 The roast duck with ‘mole’ was pretty bland. Proper mole is one of the more complex sauces in existence often containing more than 20 ingredients, while this one tasted like it was missing about 75 per cent of those. 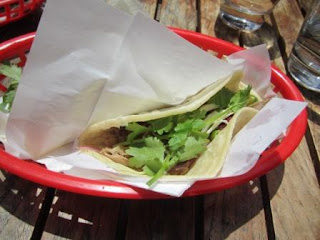 We finished on a better note with the grilled corn with chipotle and an interesting mix of cheddar and queso fresco ($6). The corn was deliciously charred and cheesy and was well accompanied with lime. But seriously, it would be pretty hard to ruin grilled corn.

My tips for Paco’s Tacos:

This week I decided to dip my toe back into the Mexican dining scene with a dinner visit to the brand new cantina, Fonda on Swan Street in Richmond with Clare.

It was buzzing when we arrived with a lot of people waiting for takeaway or tables. I was craning my neck to check out the action in the open kitchen, which included a guy dedicated to pressing and grilling tortillas (awesome).
We were finally seated in the cute courtyard at the back and proceeded to peruse the soft opening menu (they’ve only been open for a few weeks and are still tweaking things).  I wanted to order everything but had to compromise and pick out a selection to share.

Our beverage choice was pink grapefruit and guava Jarritos Soda ($4.5). 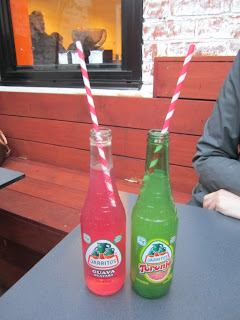 We started with the delicious fish taco with chipotle aioli, pickled onion and carrot with cabbage ($6). This was mine and Clare’s favourite for the night with the crispy crumbed fish and creamy aioli (topped with some hot sauce of course). 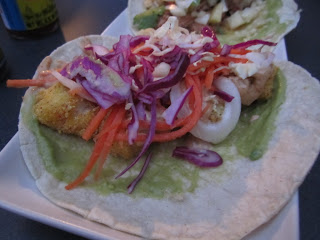 The braised pork taco with pineapple, onion, coriander and lime ($5) was also good. 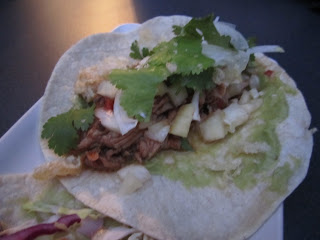 Next we had the juicy charred corn with chipotle aioli, salted ricotta (milder than queso fresco) and lime (could’ve been more generous with the lime, it was difficult to squeeze anything out of the lime stubs). To finish we shared the chopped beef burrito ($13.50) with black beans, salsa roja and chipotle aioli. The burrito was beefy good (really good flour tortilla) but could be improved with the aioli inside and a bit of salsa fresca to brighten up the flavours. 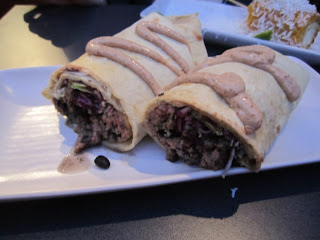 I’m really stoked to have a place like Fonda in the neighbourhood.

Update: Things I’ve tried since that are worth a try:

West Side Story: Duchess of Spotswood

It’s a trial getting me to cross over neutral territory to go back northside after my triumphant return to the south earlier this year, so you can only imagine how rare it is for me to cross the Westgate. However, last Saturday my household was persuaded to make the journey on a grey drizzly morning in search of a different kind of brunch offering and a catch up with our lone westside friend.  I know every man and his dog has blogged about Duchess of Spotswood but I like to give credit where it is due and they are doing something out of the ordinary.

The Duchess is located in a quiet stretch of shops in Spotswood (flashbacks to scienceworks anyone?) and has a gran's dining room stripped bare feel with communal tables, a chandelier and an enticing pastry cabinet. It’s always busy rain or shine but rain reduces its capacity by making the courtyard untenable. Its menu is heavily influenced by English sensibilities and its dishes have a variety of clever names.

We started with a round of coffees, which were good but  not photographed due to the desperate need for caffeine interfering with cameras.

I ordered the Duchess of Pork (I do have a slight porcine obsession), which was a very porky combination of crispy fried pork jowl terrine with fried egg (that was a touch of pork floss on the egg with the truffle), rich truffle sauce and sourdough toast for dipping ($18.50). 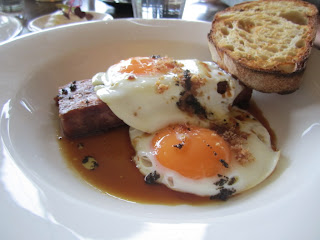 Y ordered the lighter option of Simple Pleasures, which was a fresh tasting combination of broad beans, asparagus, radish herbs and goats curd with sourdough toast and poached eggs ($17.50) 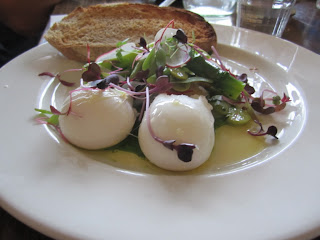 B had the Breakfast of Champignons: an aptly named combination of potato and barley hash with field mushrooms, Stilton and poached eggs ($17.50). The Stilton did slightly overpower the rest of the flavours as would be expected so I wouldn’t recommend if you aren’t a fan of pungent cheese (which B and I luckily are). 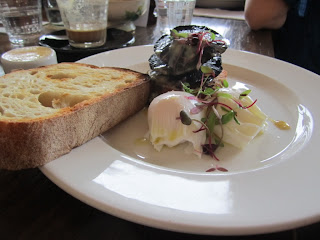 I’d say it’s worth the trip but be prepared to wait.

After a long day swimming and sunbathing with KC, we joined a friend for dinner at Chilam Balam in Lakeview, a cute little area about 10 minutes north of the CBD.

Chilam Balam has a very relaxed vibe with its unassuming basement location, dinner party vibe and eclectic tunes. Something about the place made me feel like the playlist had been tailored for my tastes as well as the menu. Chilam Balam’s talented young chef, Chuy Valencia, has paid his dues at top restaurants including a stint as sous chef at Frontera Grill and Topolobampo. He works with seasonal ingredients, changing the menu often and cultivating close relationships with local producers. The attention to detail shows in the expert flavour combinations and execution.

We began our meal with a jug of agua fresca (then a bottle of byo wine) and ahi tuna ceviche with ground cherry pico de gallo, tamarind, sweet corn and crispy plantain chips ($15.95 + tax and tip). The ceviche was and incredible combination of fresh and sour flavours with the crunch of the plantain chips. 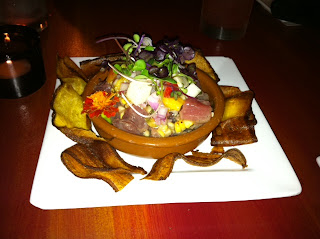 Our next dish was lamb shank barbacoa with red chilli sope, with a peanut thickened salsa served with lime and queso fresco ($14.25). The lamb was unctuous and the dish was hearty without being overly stodgy. 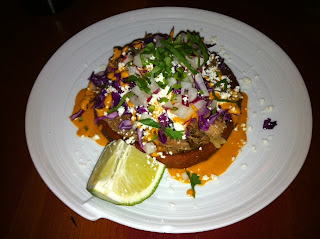 This was followed by pan roasted duck breast with adobo sauce, mashed Yukon potato, grilled haricot vert and chorizo ($14.95). The duck was served with tortillas to make tacos with – delicious. 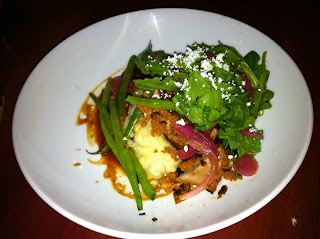 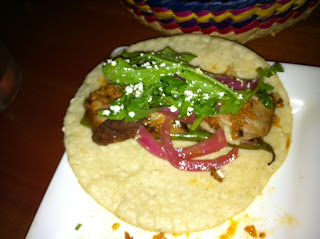 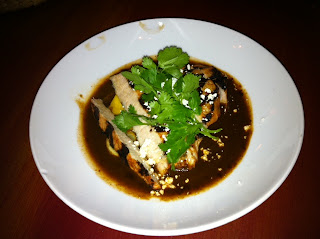 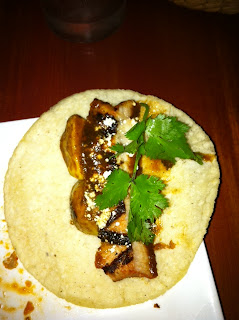 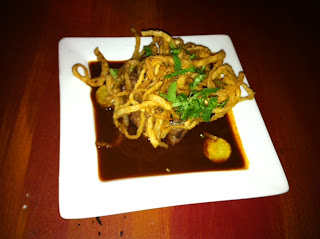 We were fit to burst by this stage but had to try a dessert. We decided on the chilli chocolate mousse with spiced goats cheese, orange liqueur flambéed marshmallow and fried plantain ($7.50). It was a deliciously adult version of a chocolate cheesecake with intriguing flavours working in synch. 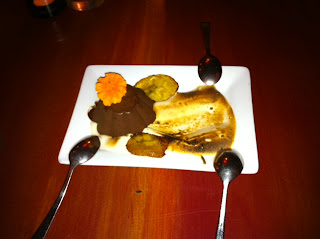