Gorging for a month...


After a bit of a work induced blogging hiatus I thought it would be fun to reminisce about the month of eating that has led me to hitting the gym almost every day and subsisting on Lite'n Easy for a few weeks; desperate measures to avoid buying new jeans and to get ready for an upcoming northern hemisphere summer visit.

I ducked into Meatmother in Richmond with my Kansas City barbecue obsessed father and barbecue novice BF to check out what the 'cue in Richmond was like. From a Melbourne perspective it was decent but I probably wouldn't repeat visit if it were located in the US (to be fair i have only been to top notch barbecue restaurants in KC and Austin and my dad regularly smokes me low and slow ribs of amazingness). If only Aaron Franklin would set up shop in Melbourne.

Highlights: the bacon old fashioned, the fun bartender, the sides, the short rib and the pork ribs
Avoid: the brisket if you've ever been to Texas and eaten barbecue - it is nicely cooked beef but missing a smokiness

My team at work went for a celebratory lunch at PM24 after a major deadline.

The three course set menu was good value. I had the pork terrine, the rotisserie chicken and the pear and almond tart (and a fair amount of wine...). The chicken was the highlight.


I personally think that there are regional restaurants that are doing more exciting and consistent food that probably deserve more hats than PM24.

I've been in to Spring St Grocer a few times since it opened (so many times for the gelati when the gelateria opened last year). Since the grocer/deli/cheesemonger section opened, I've found that their interesting array sandwiches make an excellent addition to my work lunch options (prices ranging from $10 for a more basic sandwich to $16 for one with foie gras). They started out with a menu of over 20 sandwiches but are curating them down to a few less. Usually I would be unhappy about that, but in this case it will help reduce that feeling of being overwhelmed by choice.

After hearing that EARL would be opening a second outpost in Collins Place I developed an insurmountable craving for pork belly that could only be cured by a long trek down to the legal district for a sandwich meal aka crackling delivery device. EARL's pork belly has long been one of my favourite sandwiches in Melbourne. 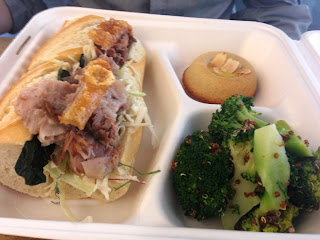 On a recent whirlwind work consultation trip to Mildura we ducked into Mildura Brewery for a decent pub lunch. I ordered the rump steak thinking it would be the smaller of the three steaks on offer, but ended up with one of the largest steaks ever seen in Australia. It was huge. It was also very flavoursome, properly aged, and well cooked.

We also had a lovely breakfast at Stefano's cafe with passable coffee. Both are worth a visit if you find yourself in Mildura.

A good friend of mine, who rarely gets excited about eating out, recently sent me an excited text about the food at Industry Beans. I'm glad I took her recommendation and trawled the back streets of Fitzroy to drop in for a weekend 'brunch' (at around 3pm). 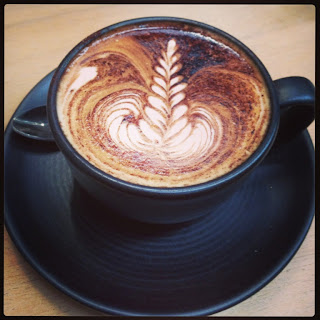 The coffee is exceptional and the kitchen is keeping up by delivering innovative dishes that tie in with the coffee. I really enjoyed the cold drip 'caviar' with the French toast.